REDWOOD CITY, Calif. and MADRID, May 9, 2018 /PRNewswire/ -- Equinix, Inc. (Nasdaq: EQIX), the global interconnection and data center company, and Telxius, Telefónica's infrastructure subsidiary, today announced that they are working together on U.S. facilities and services for the next-generation cable landing station architecture for the MAREA and BRUSA cable systems. The two subsea cables will terminate in the U.S. directly into the MAREA and BRUSA cable landing station located in Virginia Beach, VA, and the capacity will extend the backhaul capacity into Equinix DC2 International Business Exchange™ (IBX®) data center, representing the newest innovative design in subsea cable infrastructure. 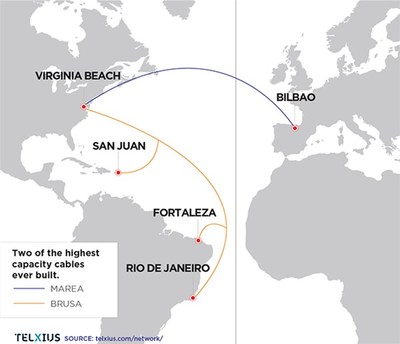 Equinix global IBX data centers are ideal for extending the backhaul capacity of a subsea cable system directly into a high-density data center. This new architecture greatly simplifies network design, offers access to a dense, rich ecosystem of networks, clouds and IT service providers and allows easy access for customers. Leveraging the power of Equinix Cloud Exchange Fabric™ (ECX Fabric™), Equinix customers will have direct access to the MAREA and BRUSA cable systems via a simple cross connect from any IBX data center.

"We're partnering on new cable landing station projects that give our customers improved access to the expanding global subsea cable network. With this next-generation cable landing station design, the cables extend directly to an Equinix IBX data center. That means any user of a subsea cable system that lands inside one of our Equinix global data center termination points has instant, low-latency access to a host of vibrant industry ecosystems inside Equinix, and that's a huge advantage."

"This new cable landing station design effectively connects the data center and submarine communications worlds and opens the door to faster growth in bandwidth rates for our customers. This cutting-edge architecture leverages the ultra-high capacity of BRUSA and MAREA, two of the highest capacity cables ever built. It has been developed to fully address the needs of our customers in terms of both capacity and efficiency."

Equinix, Inc. (Nasdaq: EQIX) connects the world's leading businesses to their customers, employees and partners inside the most-interconnected data centers.  In 52 markets worldwide, Equinix is where companies come together to realize new opportunities and accelerate their business, IT and cloud strategies. http://www.equinix.com/

Telxius is the telecommunication infrastructure company of the Telefónica Group. Telxius manages a unique combination of towers and an international network of high-capacity fiber optic submarine cables. As specialists in telecommunication infrastructure, we aim at enabling the best communication for our customers. With more than 16,300 telecommunications towers in six countries, Telxius features one of the most extensive tower catalogs in the world, effectively serving customers as the leading market provider in Spain and Germany and a main provider in Brazil, Chile, Peru and Argentina. In addition, Telxius manages the 65,000 kilometers of its international network of high-capacity fiber optic submarine cables, which includes SAM-1 and PCCS, both connecting the U.S., Central America and South America. Telxius is also part of MAREA, the highest capacity submarine cable to ever cross the Atlantic, in partnership with Microsoft and Facebook, and is currently building the 11,000-kilometer cable BRUSA, connecting Brazil, Puerto Rico and the U.S. https://telxius.com

This press release contains forward-looking statements that involve risks and uncertainties. Actual results may differ materially from expectations discussed in such forward-looking statements. Factors that might cause such differences include, but are not limited to, the challenges of acquiring, operating and constructing IBX data centers and developing, deploying and delivering Equinix services; unanticipated costs or difficulties relating to the integration of companies we have acquired or will acquire into Equinix; a failure to receive significant revenue from customers in recently built out or acquired data centers; failure to complete any financing arrangements contemplated from time to time; competition from existing and new competitors; the ability to generate sufficient cash flow or otherwise obtain funds to repay new or outstanding indebtedness; the loss or decline in business from our key customers; and other risks described from time to time in Equinix filings with the Securities and Exchange Commission. In particular, see recent Equinix quarterly and annual reports filed with the Securities and Exchange Commission, copies of which are available upon request from Equinix. Equinix does not assume any obligation to update the forward-looking information contained in this press release.