Equinix to Extend Market Leadership in Australia through Acquisition of Metronode

REDWOOD CITY, Calif., Dec. 17, 2017 /PRNewswire/ -- Equinix, Inc. (Nasdaq: EQIX), the global interconnection and data center company, today announced that it has entered into an agreement with Ontario Teachers' Pension Plan to acquire all of the equity interests in the Metronode group of companies, an Australian data center business, in an all-cash transaction for A$1.035 billion, or approximately US$792 million. Metronode is a leading data center provider operating facilities throughout Australia, housing mission-critical internet and communications infrastructure for some of Australia's largest corporations, government agencies, telecommunications and IT service providers. Metronode generated approximately A$60 million, or approximately US$46 million, of revenues in the 12 months ending September 30, 2017, with a margin profile accretive to the Equinix Asia-Pacific business. The acquisition agreement was signed on December 15, 2017, and the transaction is expected to close in the first half of 2018, subject to some closing conditions including regulatory approval.

The acquisition of Metronode will further strengthen the leadership position of Equinix in the Asia-Pacific region and support its ongoing global expansion. As a result of the transaction, Equinix will expand its national footprint by adding 10 data centers, strengthening its position in Sydney and Melbourne, and adding a presence in Perth, Canberra, Adelaide and Brisbane, four new metros to the Equinix global platform. This will bring the company's total International Business Exchange™ (IBX®) data center footprint in Australia to 15 data centers, further extending its global ecosystem coverage and enabling customers to deploy their infrastructure, applications and services closer to the edge. 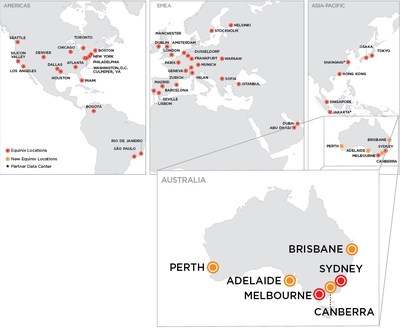 Equinix, Inc. (Nasdaq: EQIX) connects the world's leading businesses to their customers, employees and partners inside the most interconnected data centers. In 48 markets across five continents, Equinix is where companies come together to realize new opportunities and accelerate their business, IT and cloud strategies. Equinix.com.

This press release contains forward-looking statements which are based on current expectations, forecasts and assumptions that involve risks and uncertainties that could cause actual results to differ materially from expectations discussed in such forward-looking statements, including statements related to the acquisition of data centers from Metronode, the expected benefits from the acquisition and the expected timing for closing the acquisition.  When used in this document, the words "anticipates," "can," "will," "look forward to," "expected" and similar expressions and any other statements that are not historical facts are intended to identify those assertions as forward-looking statements. Factors that might cause such differences include, but are not limited to, the failure of one or more conditions to the acquisition of data centers from Metronode to be satisfied; the occurrence of any event, change or other circumstance that would compromise our ability to complete the acquisition of such data centers from Metronode within the expected timeframe or at all; the possibility that the anticipated benefits from the proposed acquisition cannot be fully realized or may take longer to realize than expected; unanticipated costs or difficulties relating to the integration of data centers or companies we have acquired or will acquire into Equinix, including the data centers we may acquire from Metronode; the challenges of acquiring, operating and constructing IBX data centers and developing, deploying and delivering Equinix services, including in the Metronode data centers; a failure to receive significant revenue from customers in recently built out or acquired data centers, including those acquired from Metronode; competition from existing and new competitors; the loss or decline in business from our key customers; and other risks described from time to time in Equinix filings with the Securities and Exchange Commission. Accordingly, no assurances can be given that any of the events anticipated by the forward-looking statements will transpire or occur, or if any of them do so, what impact they will have on Equinix. In particular, see recent Equinix quarterly and annual reports filed with the Securities and Exchange Commission, copies of which are available upon request from Equinix. Equinix does not assume any obligation to update the forward-looking information contained in this press release.