Equinix does not provide forward-looking guidance for certain financial data, such as depreciation, amortization, accretion, stock-based compensation, net income or loss from operations, cash generated from operating activities and cash used in investing activities, and as a result, is not able to provide a reconciliation of GAAP to non-GAAP financial measures for forward-looking data without unreasonable effort. The impact of such adjustments could be significant.

Quote
Steve Smith, President and CEO, Equinix:
"Equinix had a strong third quarter as customers continue to adopt interconnection oriented architectures as the preferred platform for their shift to digital.  Robust demand is driving higher utilization levels, and we are investing in support of this momentum with expansions, both organically and through strategic acquisitions, to deliver even greater value to customers through our global platform.  As customers embrace hybrid and multicloud as the IT architecture of choice, our interconnection strength is resonating, and Equinix continues to outpace market growth and gain market share."

The adjusted EBITDA guidance is based on the revenue guidance less our expectations of cash cost of revenues and cash operating expenses. The AFFO guidance is based on the adjusted EBITDA guidance less our expectations of net interest expense, an installation revenue adjustment, a straight-line rent expense adjustment, amortization of deferred financing costs, gains (losses) on debt extinguishment, an income tax expense adjustment, recurring capital expenditures and adjustments for unconsolidated joint ventures' and non-controlling interests' share of these items.

Equinix will discuss its quarterly results for the period ended September 30, 2017, along with its future outlook, in its quarterly conference call on Wednesday, November 1, 2017, at 5:30 p.m. ET (2:30 p.m. PT). A simultaneous live webcast of the call will be available on the Company's Investor Relations website at www.equinix.com/investors. To hear the conference call live, please dial 1-517-308-9482 (domestic and international) and reference the passcode EQIX.

A replay of the call will be available one hour after the call, through Wednesday, February 14, 2018, by dialing 1-203-369-1512 and referencing the passcode 2017. In addition, the webcast will be available at www.equinix.com/investors. No password is required for the webcast.

Equinix has made available on its website a presentation designed to accompany the discussion of Equinix results and future outlook, along with certain supplemental financial information and other data. Interested parties may access this information through the Equinix Investor Relations website at www.equinix.com/investors.

Equinix, Inc. (Nasdaq: EQIX) connects the world's leading businesses to their customers, employees and partners inside the most interconnected data centers. In 48 markets across five continents, Equinix is where companies come together to realize new opportunities and accelerate their business, IT and cloud strategies.

Equinix provides all information required in accordance with generally accepted accounting principles ("GAAP"), but it believes that evaluating its ongoing operating results may be difficult if limited to reviewing only GAAP financial measures. Accordingly, Equinix uses non-GAAP financial measures to evaluate its operations.

Equinix excludes depreciation expense as these charges primarily relate to the initial construction costs of an IBX center, and do not reflect its current or future cash spending levels to support its business. Its IBX centers are long-lived assets, and have an economic life greater than 10 years. The construction costs of an IBX center do not recur with respect to such data center, although Equinix may incur initial construction costs in future periods with respect to additional IBX centers, and future capital expenditures remain minor relative to the initial investment. This is a trend it expects to continue. In addition, depreciation is also based on the estimated useful lives of the IBX centers. These estimates could vary from actual performance of the asset, are based on historic costs incurred to build out our IBX centers and are not indicative of current or expected future capital expenditures. Therefore, Equinix excludes depreciation from its operating results when evaluating its operations.

In addition, in presenting the non-GAAP financial measures, Equinix also excludes amortization expense related to acquired intangible assets. Amortization expense is significantly affected by the timing and magnitude of acquisitions and these charges may vary in amount from period to period. We exclude amortization expense to facilitate a more meaningful evaluation of our current operating performance and comparisons to our prior periods. Equinix excludes accretion expense, both as it relates to its asset retirement obligations as well as its accrued restructuring charges, as these expenses represent costs which Equinix also believes are not meaningful in evaluating Equinix's current operations. Equinix excludes stock-based compensation expense, as it can vary significantly from period to period based on share price, the timing, size and nature of equity awards. As such, Equinix and many investors and analysts, exclude this stock-based compensation expense to compare its operating results with those of other companies. Equinix excludes restructuring charges from its non-GAAP financial measures. The restructuring charges relate to Equinix's decision to exit leases for excess space adjacent to several of its IBX centers, which it did not intend to build out, or its decision to reverse such restructuring charges. Equinix also excludes impairment charges related to certain long-lived assets. The impairment charges are related to expense recognized whenever events or changes in circumstances indicate that the carrying amount of long-lived assets are not recoverable. Equinix also excludes gain or loss on asset sales as it represents profit that is not meaningful in evaluating the current or future operating performance. Finally, Equinix excludes acquisition costs from its non-GAAP financial measures to allow more comparable comparisons of the financial results to the historical operations. The acquisition costs relate to costs Equinix incurs in connection with business combinations. Such charges generally are not relevant to assessing the long-term performance of Equinix. In addition, the frequency and amount of such charges vary significantly based on the size and timing of the acquisitions. Management believes items such as restructuring charges, impairment charges, acquisition costs and gain or loss on asset sales are non-core transactions; however, these types of costs may occur in future periods.

Equinix includes an adjustment for revenues from installation fees, since installation fees are deferred and recognized ratably over the expected life of the installation, although the fees are generally paid in a lump sum upon installation. Equinix includes an adjustment for straight-line rent expense on its operating leases, since the total minimum lease payments are recognized ratably over the lease term, although the lease payments generally increase over the lease term. The adjustments for both installation revenues and straight-line rent expense are intended to isolate the cash activity included within the straight-lined or amortized results in the consolidated statement of operations. Equinix excludes the amortization of deferred financing costs as these expenses relate to the initial costs incurred in connection with its debt financings that have no current or future cash obligations. Equinix excludes gain or loss on debt extinguishment since it represents a cost that is not a good indicator of Equinix's current or future operating performance. Equinix includes an income tax expense adjustment, which represents the non-cash tax impact due to changes in valuation allowances and uncertain tax positions that do not relate to the current period's operations. Equinix excludes recurring capital expenditures, which represent expenditures to extend the useful life of its IBX centers or other assets that are required to support current revenues. Equinix also excludes net income or loss from discontinued operations, net of tax, which represents results that are not a good indicator of our current or future operating performance.

Equinix presents constant currency results of operations, which is a non-GAAP financial measure and is not meant to be considered in isolation or as an alternative to GAAP results of operations. However, Equinix has presented this non-GAAP financial measure to provide investors with an additional tool to evaluate its operating results without the impact of fluctuations in foreign currency exchange rates, thereby facilitating period-to-period comparisons of Equinix's business performance. To present this information, Equinix's current and comparative prior period revenues and certain operating expenses from entities with functional currencies other than the U.S. dollar are converted into U.S. dollars at a consistent exchange rate for purposes of each result being compared.

This press release contains forward-looking statements that involve risks and uncertainties. Actual results may differ materially from expectations discussed in such forward-looking statements. Factors that might cause such differences include, but are not limited to, the challenges of acquiring, operating and constructing IBX data centers and developing, deploying and delivering Equinix services; unanticipated costs or difficulties relating to the integration of companies we have acquired or will acquire into Equinix; a failure to receive significant revenues from customers in recently built out or acquired data centers; failure to complete any financing arrangements contemplated from time to time; competition from existing and new competitors; the ability to generate sufficient cash flow or otherwise obtain funds to repay new or outstanding indebtedness; the loss or decline in business from our key customers; and other risks described from time to time in Equinix's filings with the Securities and Exchange Commission. In particular, see Equinix's recent quarterly and annual reports filed with the Securities and Exchange Commission, copies of which are available upon request from Equinix. Equinix does not assume any obligation to update the forward-looking information contained in this press release. 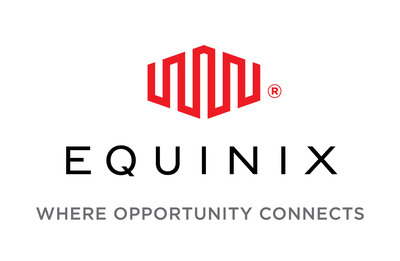